I recently spent a hot July weekend visiting some friends in a lovely Southern town [1]. We spent our mornings binging on history and our afternoons drinking beers in the river: a quiet, wide-mouthed expanse of cool, fresh water, surrounded by grassy clusters of giant flat rocks and sandy banks.

My companions and I were in awe. Compared to the packed tourist crowds of San Francisco’s parks and beaches, this was positively idyllic. One guy, a local resident, laughed. “Don’t tell anyone about us,” he said. “When you go back to San Francisco, tell them it was terrible.” He was smiling, but his eyes said he was serious.

My first reaction was to wrinkle my nose. His comment reminded me of the NIMBY-ish attitudes of urban dwellers who complain about newcomers moving in and “ruining” their neighborhoods. I generally believe that people, interests, and potential kinships are unevenly distributed by geography. Cities are living organisms, and changing demographics is part of what makes them beautiful. 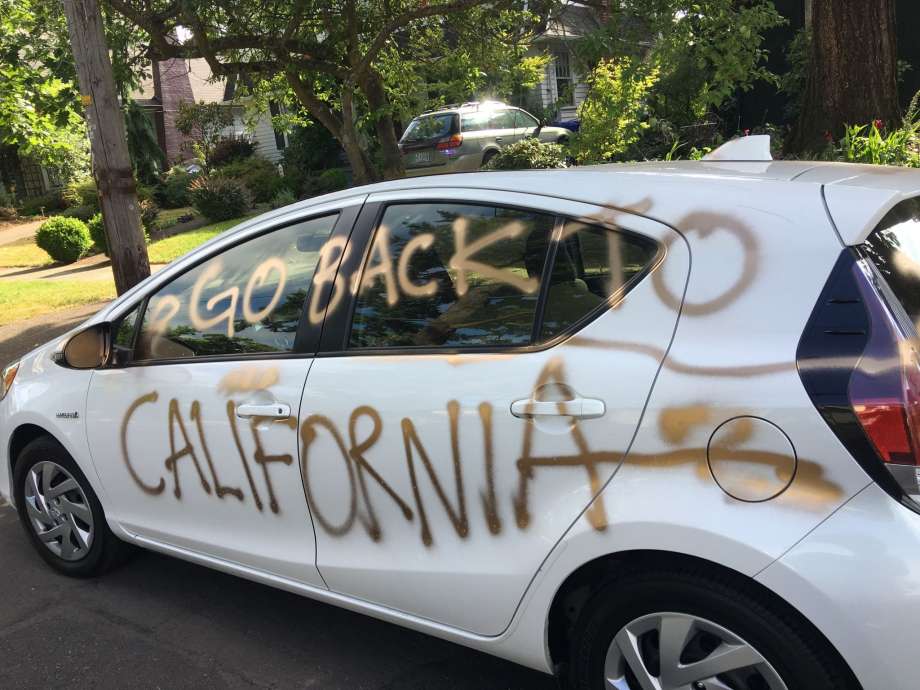 Portland to San Francisco: “Go back to California” Via SF Gate / The Oregonian

But then I remembered that I’ve made a similar argument about online communities. I enjoy poking around the weirder parts of the internet. People come together over some really strange stuff, and because so many of these exchanges are public or semi-public, it’s easy for lurkers like me to read and follow along from a respectful distance.

Sometimes I think it’d be fun to write about the things I stumble upon. There are so many interesting subcultures hiding in plain sight! Shouldn’t I help more likeminded people find each other?

But not every community wants to be found. The online equivalent of NIMBYism is the “GET OFF MY BOARD” battle cry, which comes from 4chan’s /r9k/, but probably summarizes the collective sentiment of a lot of hidden subcultures that lurk in shallow waters, just beneath the surface.

The gates to the underworld

Anyone who’s made it as a regular on an internet forum has likely experienced a form of gentle hazing, in which they are ignored, mocked, and shouted down before they eventually flee for the hills, or else stand their ground and earn the respect of their peers.

Like the Underworld in Greek mythology, the gates to these worlds are technically open to living souls, so long as you find a way to cross the river Styx. But nobody’s going to make it easy for you, and that’s kind of the point. While these attitudes might appear exclusionary, it’s the city’s way of retaining their identity, protecting themselves from unforeseen landslides that might irrevocably damage their way of life. Driving the winding mountain road up to a summit can be an excruciating experience, filled with motion sickness and cliffhanging perils, but once you make it, the journey you endured feels that much more satisfying. [2]

While some communities haze their newcomers, others resist being defined at all. Ribbonfarm’s Venkatesh Rao, for example, frequently downplays the term ‘postrationalist’ as well as the very idea of fostering a community around it, despite the fact that many people are clearly attracted to the same watering hole. I tend to interpret this dismissiveness as a way of saying, “We don’t want to become a ‘thing’ because ‘things’ are destroyable by outsiders.” Avoiding labels is a way of keeping hidden cities away from the colonizers, like a nomadic tribe on the move.

Some of these adaptive mechanisms are a function of size. New York City is enormous: it can welcome millions of tourists per year without changing its fundamental nature. By contrast, when I visited Reykjavik recently, it was clear that the 2 million tourists to Iceland per year had subsumed the resident population of less than 200,000. Blasting a fragile ecosystem with a firehose of outsiders, even if they have good intentions, can destroy its essence.

Online communities are even more vulnerable to outside attention than physical cities, because mobility is so much easier. Visiting Iceland requires a plane ticket and a hotel reservation; visiting an online community is just a couple clicks away from my bedroom.

A few years ago, I spent the better part of a year sampling croissants with a group of friends, searching for the best croissant in San Francisco. (Mostly it was an excuse to hang out and eat delicious pastries.) When we tried the croissants at a bakery called Arsicault, there was no contest. What’s better, it was nestled away in a quiet part of the city, hidden from prying crowds.

I kept going back. I was even delighted to share my discovery with a few appreciative friends. But then Bon Appetit published an article declaring Arsicault one of the “best new bakeries” in America, and just like that, our secret was gone. For the next two years, the lines were always out the door. The staff had to impose limits upon how many pastries a customer could order. I stopped going until the crowds subsided.

The difference between a bakery and an internet subculture is that one makes croissants and the other makes ideas. As far as I can tell from public information, the press was good for Arsicault. It turns out they had only opened a year before, and all the public attention helped them open up a second location. More customers, under the right circumstances, means more capital to expand operations. The crazy lines eventually died down to a more manageable wait, too.

Online communities are different, because what they “produce” (i.e. the content we read, whether public Twitter exchanges, Reddit AMAs, or forum threads) is a function of the members who participate. Croissants are passively consumed by paying customers; nobody is jumping over the counter and trying to make the croissants themselves.

But in an online community, because there aren’t clear boundaries between who consumes and who produces ideas, too much unwanted attention and catering to newcomers can detract from, and ultimately damage, the incubative state of ideas.

When I was a college student traveling around Europe (and before we had internet on our phones), I’d observe what I called the “Lonely Planet effect”. As a backpacker, you go to the places recommended in your Lonely Planet guidebook, but because all the other backpackers go there too, eventually, these “local” recommendations become displaced by tourists. You walk into a restaurant and see clusters of your tired ilk, each clutching their tattered, highlighted, Lonely Planet guidebooks, trying to pretend they’re having an authentic experience. [3]

Tourists don’t go to recommended restaurants just to eat the food. They also go for the experience of being somewhere local. The ambiance of the restaurant is at least as important as the food they pay for.

In the physical world, tourism is a rivalrous good. My presence is necessary for me to “consume” the experience, but it also detracts from the experience of others. But on the internet, you can choose whether you want to make yourself visible. While more people might flood online communities than physical cities, it’s also easier to be an invisible tourist online.

We’re not used to thinking about the passive consumer experience of social content as an explicit choice, but maybe we should. You can visit an online community, can enjoy reading through the interactions of people you might otherwise never get to know, without interfering with their magic. You don’t have to become a member of that community to eat their croissants.

That being said, if you’re sharing something you’ve found, it’s not really possible to tell your audience how to behave. And recommendations still move through pneumatic tubes rather than evaporation ponds. One tweet, post, or article from someone with a big enough audience is like sunlight on a magnifying glass, concentrating screaming hordes of people onto a single, unsuspecting point that spontaneously combusts into flames. I can’t quite blame some communities for wanting to avoid press, even good press.

Finding the rate of change

Still, there’s a part of my brain that whines, “Don’t be a Luddite!” Isn’t the unpredictable rise and decline of human activity what makes communities so interesting? I don’t want to be a conservationist, vainly trying to save every endangered species, every native language, instead of embracing the boom-bust cycle of death and life that afflicts every living organism. Maybe the role I play in that system is to make weird ideas more digestible to the public and spread them around more widely.

I don’t want to suggest that we should resist change entirely. I do think we can be thoughtful about the rate of change that we introduce. I also think it’s a choice, rather than an inevitability, to drop bombs that throw an entire ecosystem off-balance.

There’s that classic sign in national parks that reads, “Take only pictures, leave only footprints”. Online, it’s possible to be a lurker, to enjoy the fruits of someone else’s labor without jumping in. But how do you know when to move from observing to participating? When should you write about a topic, versus respecting a community’s intentions to stay off the radar? When does enthusiasm cross over to exploitation? I’m not sure I know the difference yet, but I know that there is one.