The Freakonomics of Graduate School vs. Entrepreneurship

Recently, I mused aloud to a couple of friends that I seem to know a lot of women who are going to graduate school, but that most of the men in my peer group were entering tech or entrepreneurship.

I wondered whether this was actually true or purely anecdotal. So we looked up the percentage of women who are in graduate school.

We learned that 58% of all first-time graduate school students are women, according to 2012 data. And on a related note, graduate school enrollment overall has been dropping slightly in recent years.

Upon reading this, I remembered a chapter of Freakonomics where the authors identified socioeconomic patterns among families naming their children. Baby naming trends originate among high-income families, then trickle down to lower-income families who are trying to emulate them, at which point the names fall out of favor because they seem too “low-end”.

I wonder: does the same thing happen between men and women with their careers? Maybe graduate school was the thing to do until recently, but now men have turned their eye toward pursuing careers in tech and entrepreneurship, leaving women behind.

To think about this pattern in reverse, there is also the anecdote that in the 1960s, most computer programmers were women - but this was because it was considered to be women’s work. “Programmer” then did not carry the social cachet that it does today. Around the time that computer science became interesting to men, this happened: 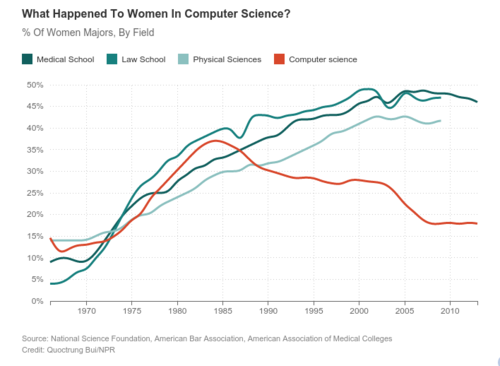 (Note that the first Macintosh personal computer was released in 1984.)

And so perhaps it’s not that things were once better and then got worse. It’s that women have simply never been collectively represented in a position considered to be respected and powerful by their contemporaries.

If that’s the way it goes, 30 years from now, I can confidently predict there will be plenty of women who are tech founders, even if we cease all gender equality efforts right now. But did that mean we succeeded, if being a tech founder is no longer en vogue?

I have no idea if any of this is right. It’s just a hypothesis. But for those seeking powerful career positions, I would suggest skipping one step ahead. Rather than focus on getting a graduate degree, learning to code, or starting a company, the goal should be to stay ahead of the trends.